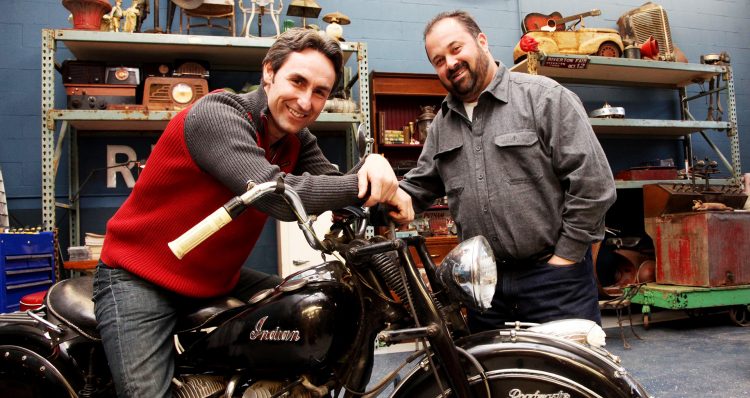 In its 10 years and 20 seasons, Mike Wolfe and Frank Fritz from American Pickers have found a good share of Indian Motorcycles and parts ranging from old farm bikes to highway cruisers. Here are our favorites of their picks:

1914 Indian Powerplus Twin. Owned by a guy named Beno (who was actually born Indian motorcycle shop, funny enough), this old farm bike was among the first to introduce electric headlights and electric starters. As excited as Mike is about this bike though, Beno is unable to part with it due to the sentiment of it once belonging to his father and the sentiment of the cow manure still caked on the back tire.

20s cutaway Indian display motor/1908 Indian motor. Beno also had a couple incredibly rare motors that Mike couldn’t pass up. This time Mike is able to pull the trigger and get the bundle of motors for a fair price from Beno.

1928 Indian 3050. What was used as a “prop” for years, Frank decides he wants to get the bike out on the road again. After some bartering, digging through a garage to find some of the bike’s original parts and then more bartering, Frank is able to ride away with the bike.

1951 Indian Chief/Indian Powerplus Motor. The pickers visit a motel and its owner Tom who has his own personal Indian Motorcycle museum in the lobby. Initially, they are attracted to a 1951 Chief on display in the lobby but decide the price Tom is asking is a little too “hot” and they decide to settle on an old repurposed motor they found in the back.

101 Indian Scout. Frank and Mike dig through the garage of an older couple to find the makings of a 101 Indian Scout. Mike, being the cool guy he is, is nice enough to tell old-timers what the it’s all worth and then to put it together for them, before deciding to barter down their price.

Indian Chief with sidecar. With a sidecar, alligator leather seats and a build for someone not much taller than five feet, Frank feels a connection with the Indian Chief and makes the decision take off the hands of a couple of brewers.

If you’re also feeling a connection with Indian motorcycles, check out our inventory. We have newer models of the Scout and Chief bikes as well as many more models to choose from for a variety of purposes and recreation.